The MO5 is a home computer which was designed and distributed by Thomson (a french company) in the early eighties. This machine was powered by the best processor in its category at that time, the 6809E from Motorola. The clock speed of this 8-bit processor was 1 MHz. The commercial success of this machine is mainly due to contracts from the french government whose goal was to spread computer science in the primary schools. (mainly by the "Informatique Pour Tous" project, 1985). 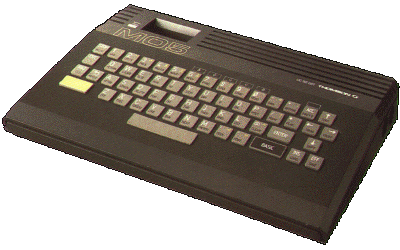 Unfortunately, Thomson made a number of marketing mistakes, which contributed a lot to the end of the computer design department in 1989 (it was created in 1979). Some interesting projects, like a 68000-based computer (running the multitasking operating system OS/9-68000), would never come out.

Other extensions exist, though not much sold:

This site is copyrighted © 1996-2021 by Edouard Forler.
Everything on this site is free but used at your own risk.